In 2011 Kenji Yamauchi made the transition from directing television commercials to full-length features films, while already actively writing plays for the Tokyo’s Seinendan theatre company. His first cinematographical product was Being Mitsuko (2011), a narrative concerning the uneventful lives of two sisters, suddenly disturbed by the appearance of a mysterious woman who claims to be their his sister.

After some years of silence, 2015 marked the year that Yamauchi’s second feature film Her Father, My Lover, a story of a young eccentric woman who falls in love with her friend’s father, was released. And now with At The Terrace, Kenji Yamauchi releases his third feature film, a film based on his own own award-winning play Trois Grotesque. Will this play make a playful transition to the silver screen or should it have remained behind a closed curtain?

The narrative of At The Terrace concerns the final moments of a party, hosted by Mr. Soejima (Kenji Iwaya), the seducer, and the theatrical busty Mrs. Kazumi Soejima (Kei Ishibashi). When the beautiful milk-white Haruko Saito (Kami Hiraiwa) comes out on the terrace to check her mobile phone, her beauty is observed by Tanoura (Hiroaki Morooka), a rather timid engineer from Toyota. As much as he wants to start a conversation with her, his inner inhibition prohibits him to even utter a single word (narra-note 1). When he later is forced to confess his liking of Haruko’s milk-white arms by Mrs. Soejima, she introduces Tanoura’s compliment on purpose in the group of guests (now joined by Haruko’s husband Mr Taro Saito (Ryuta Furuya), a designer, and Masato Saito (Takashi Okabe), who recently lost weight due to surgery) to satisfy her jealousy. An atmosphere of awkwardness ensues. And then her college-age son (Atsushi Hashimoto) arrives. 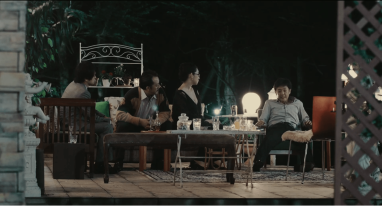 The narrative of At the terrace consists of a concatenation of conversations – the time of this concatenation being the natural time the spectator is allowed to spy on the party. At the surface level Yamauchi shows the Japanese way of engaging in social relationships and whatever awkwardness social relationships and social happenings can produce. But this awkwardness is related to the deeper thematic level of the sexual relationship (in the psychoanalytical sense). More concretely, the underlying motor of the narrative is the aspect of male phallic sexual desire (Narra-note 2, Narra-note 3). In a very artful way, the narrative displays the way the body as image is read by this male desire, how this desire protrudes our speech beyond our conscious control and even brings our comportment to the level of sexual harassment, as the image of beauty is targeted as a body to satisfy male sexual desire. The centrality of male desire is evident from the very beginning in aspect of the compliment, the catalyst at the narrative surface, showing the dangers of complimenting someone’s wife, the annoyance such complementing causes for the husband, but, above all, the effects and the irritation/jealousy the complimenting of one’s husband and the laying-bare of insecurities can generate. Additionally, the narrative touches upon the fact that women, as image, are often used, to the point of being abused, to safeguard business relationships.

At the Terrace takes places, just like the title implies, at the terrace. This terrace forms a fixed narrative space where the interactions, mainly speech interactions, are painted on. This space is mainly framed with static camera viewpoints, even though subtle camera movement is also present. Furthermore, the cinematographical framing of At the Terrace is characterized by a certain distance – wide shots, mid shots, … etc. are used in abundance – and is almost solely oriented to the terrace, with the building as background in most cases (Cine-note 1). And even though there are shots, some camera orientations that break the fourth wall, the narrative space retains its stage-like quality. 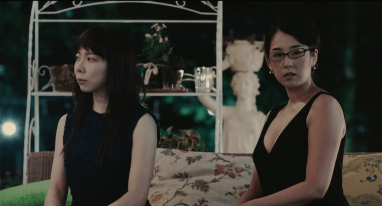 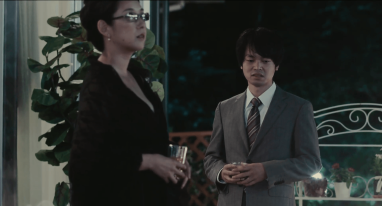 At the Terrace is an impressive cinematographical narrative. By way of Yamauchi’s cinematographical approach, the spectator is taken along signifier after signifier, conversation after conversation, never losing the spectators attention. This is in itself a success. And while the narrative’s origins as a play are often sensible, this will not diminish any enjoyment the spectator may derive from the narrative. At the Terrace proves to be a lighthearted and engaging exploration on how women, with respect to their image of beauty, are drawn to male desire to be able to experience themselves as lovable.

Cine-Note 1: For completeness sake, it should be mentioned that in some instances medium close-ups are also used. As these close-ups are sparsely used, they also have a strong effect of emphasizing facial expressions and the realization it entails.

Narra-note 1:  The narrative begins with showing the recognizable awkwardness men can feel when their inner inhibition prohibits them to even vocalize a word to the girl they are interested in

Narra-note 2: Our focus on male desire in the review might forget that there is also a place for female seduction in the narrative. But this seduction is always in interaction, as a sort of playful play, with the male sexual desire. In this respect, the female actions in the narrative is shown as subjected to the male desire.

Narra-note 3: The homosexual attraction, desire puts the fight of the two women for the male sexual desire into perspective. The very last shots, the medium close-ups of the women ridicules their entire conquest of male sexual desire.

General note 1: Yamauchi worked with the same actors and actresses for the cinematographical narrative.