Even though Yosuke Fujita’s first film success dates from 1986, when he won the grand prize in the 8mm Torino Film festival with “Tora”, audiences had to wait till 2008 before he would release his first full-length feature film. During those “empty” years Fujita-san worked at the Otona keikaku, a comedy troupe founded by Suzuki Matsuo – another notable name originating from this troupe is Kankuro Kudo.

In this slice of life comedy, we meet our first oddball, Teruo (Yoshiyoshi Arakawa), as a guy who loves to scare people with his pranks – a funny hobby that has a slightly disturbing side, as various horror props are combined with his head. Nevertheless, his love for horror pranks is put into question, most notably by his boyhood friend Hisanobu (Yoshinori Okada) (Narrative note 1). In this respect, Hisanobu, who is too kind-hearted, is confronted, as his 30th birthday is nearing, with the question of what being an adult is and what the purpose of life can be. Both seem to find an answer to their future in Akari (Yoshino Kimura), our second oddball, a klutzy social misfit with a crazy appetite for chikuwa fish sausages, whose entire world seems to circle around drawing an old eccentric homeless lady (narrative note 2). 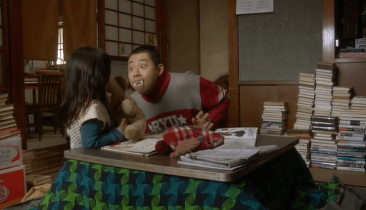 The moments of ordinary daily life, framed in a leisurely manner, contrast with the absurdity that each quirky character introduces in the depicted social interactions. It is the cinematographical objectivity, by its mostly stationary – minor moments of camera movement are present – and composedly virtue, that gives the insertion of quirkiness into the ordinariness of life its comedic and quite often absurd effect (cine-note 1, cine-note 2). In other words, the cinematography, an approach in which the comic timing is exquisite, puts most of its weight of generating comedy on the quality of acting – luckily each performance is great, but especially YoshiYoshi Arakawa’s is marvelous, and the quality of the comedic narrative as such – so no complaints here. 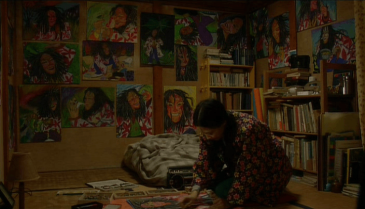 The narrative of Fine, totally fine unfolds slowly, as it puts more accent on the situations itself than on narrative progression. In this way, the slice of life narrative, reveals itself as primarily concerned with the muddling along of the lives of Teruo, Hisanobu, and Akari as such. This muddling along is nevertheless characterized by a genuine charm, a charm that originates from the warm side each character has – besides their quirky parts and the lack of a clear sense of direction in the future, and from the – often minor, development each character undergoes. Love gives purpose, disappointment hurts, friendship lasts, … etc.: these are the themes Fine, totally fine touches upon. 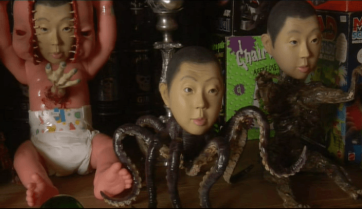 The narrative won’t produce wild laughter – maybe once of twice, but it does succeed in putting more than just a smile on the face of the spectator. In this respect, Fine, totally, Fine’s sole purpose is to make the spectator feel good, and, by way of mixing absurdity with nuanced daily life observations, it succeeds to do that with verve. An utterly engaging and rewarding experience, a testament that comedy is universal and that when all is said and done, one is fine, totally fine.

Cine-note 1: The objective narrative approach creates an ‘objective’ framed space, where the situational humor can be played out. The mix of long shots, medium shots, and close-ups crafts a cinematography that, in its objectivity, conditions a space where the comedy can be enforced. Furthermore, the mix of shots itself, as structure, often generates comedy as well. One instance of comedic absurdity is created by the succession of a close-up shot of Teruo, which seems to make the spectator the addressee of his story, by a long shot, which reveals there is no addressee at all, or in other words that the addressee is just an empty space.

Cine-note 2: The use of frontal close-ups shots, by which eye-contact with the spectator is made, give the spectator temporarily a place as an addressee in the narrative. In a given scene, extreme close-ups are even used to reveal the subjective point of view. These shots, rather than to bring subjectivity to the fore, enforce the quirkiness of the situations (see also Cine note 1).

Narrative-note 1: The repeated underlining by others on how Teruo’s pranking concerns a lack of consideration for others and possibly causing trauma, influencing the future of children in a bad way, is a funny way to ridicule Japan’s fixation with responsibility.