“A joyful and twisted take on the effects of loneliness”

The little Nami (Airi) grows up in a dysfunctional family. Both parents ignore her completely – no matter which mischief she performs. Her mother Kyoko (Mariko Akama) devotes her time trying to raise money for poor children overseas, while her father Yoichi (Kenji Matsuda) his attention is solely focused on her mother.

At the height of her obsession, Nami’s mother decides to leave Japan, causing her father to fall into depression and to throw himself into the arms of Atsuko Kitano, Akko-chan (Naoko Watanabe), his mistress. The moving-out of her sister (Wakana Sakai) leaves Nami ultimately “all on her own”.

As an adult, Nami (Kumi Takiuchi) has developed a hobby as a watcher of what she calls ‘solitarians’. With scientific rigour (detailing various types, describing their various ecological systems, … ) and a lot of joy she documents the descent of these lonely individuals into madness – and in some cases even death. One day she starts observing the estranged and grumpy Mr. Shiomi (Takashi Sasano). All goes well and satisfactory, up until Soo-Young (Kim Kkobbi), a young Christian volunteer, starts giving Mr. Shiomi hope in turning his descend around.

Greatful dead uses the theme of loneliness, a pressing problem in Japanese society, first and foremost as a thematical axis around which Nami’s narrative develops. And even though the narrative shouldn’t be understood as a social commentary – Greatful dead aims to entertain the spectator with the crazy and twisted subjective tale of Nami, it nevertheless, by way of Nami’s hobby of solitarian watching for example, instigates an awareness of the problem and the effects it has in society. Furthermore, in evoking the problem of loneliness, the narrative also enlightens the possible negative as well as the possible positive functions and effects religion can have.

Aside from celebrating the inherent joy of “watching”, in the guise of voyeurism, greatful dead also underlines the vital aspect of “being seen” by the signifiers of the Other for the existence of a subject, for a subject to be able to situate him in relation to others. In the first segment of the narrative the lack of the parent’s speech directed to Nami and her mischief, is unable to give rise to her existence in the eyes of her parents. If we take this into account, the aspect of ‘critique’ that underpins the narrative concerns first and foremost the familial structure in general and the parental presence in particular. 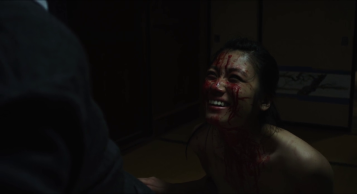 Don’t be mistaken, Greatful dead is a lighthearted narrative, a story that aims to enjoy. The second part might be darker in nature, but is framed – see style/cinematography – in such way, that it underlines the joyfulness, washing away most of the impact certain of Nami’s actions might have. And even though the ending could have been more effective on a emotive level, it’s nevertheless a worthy resolution of the narrative, accentuating Nami’s twisted understanding of what “love” is and further highlighting the importance of “being seen by the Other”.

The fact that Greatful Dead is in essence a character study is further corroborated by the ways in which the cinematography is employed. In the first part of the narrative, for instance – and this is evident – the cinematography is almost solely focused on and structured in function of Nami and her expressions (e.g. her smile). The cinematography in the first narrative segment is almost entirely constructed using (often lengthy) fixed, static shots, enabling the viewer to focus on the divergent expressions/reactions that characters, e.g. family, classmates, teachers, exhibit in relation to the non-verbal communication of Nami. And the few moving shots present have no other purpose than further empower this non-verbal communication of Nami. 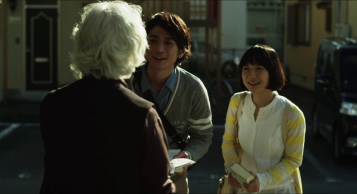 The character driven nature of Greatful dead is furthermore underlined in those instances where the subjective narration,
Nami’s speech, guides and finds in reflection in the framing and composition of the scene. This compositional twist adds a fresh, intelligent, funny taste to the cinematography blend. In the same vain, the classical music has often no other function than to evoke and further underline Nami’s emotional state and expressions.

Nami’s smile, often slightly unsettling in relation to her surroundings and often underlining the mysterious aspect in her enjoyment, is ever joyful and charming. The pursued cinematographical focus on Nami’s emotional responses, responses which ever feel genuine, and the quirky way in which Nami narrates has the effect of immediately griping the viewer and engaging him in Nami’s adventure (of observation and exploration), full of wonder. In other words: Kumi Takiuchi’s performance as Nami is so captivating that it enables the cinematographical product, given its character driven nature, to realize an irresistible charm and achieve greatness. 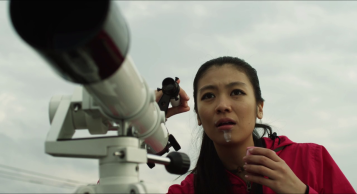 It’s only later in the narrative that the cinematographical palette of Eiji Uchida becomes more varied (wide shots, close-ups, …) – in part because the narrative integrates other viewpoints (Mr. Shiomi and Soo-Young) next to the strict narrative viewpoint of Nami. And this is also true for the framing of the camerawork, as Uchida shifts to a shaky framing to communicate Nami’s subjective tension and, in another scene, to support the (unsettling nature) of the action staged. Nevertheless, and this proves his talent, Uchida successfully keeps a firm grip on the overarching cinematographical structure, keeping the central focus on Nami, the fundamental character that drives the narrative.

Greatful dead is nothing other than a very joyful, but twisted take on the effects of loneliness in society. And even though it introduces an awareness concerning the problem of loneliness, the narrative has no other aim than to entertain. Uchida successfully engages the viewer in Nami’s absurd and twisted narrative. The joy and the charm that underpins this twisted narrative is nevertheless, for the greater part, only realized by the irresistible performance of Kumi Takiuchi: she and no one else carries this cinematographical product to greatness.

But we shouldn’t forget that it’s Uchida’s cinematography, his way in approaching and staging his narrative, that enables Kumi Takiuchi and her performance to blossom on the screen. As such greatful dead proves not only the talent of Kumi Takiuchi but also the talent of Eiji Uchida.

[Greatful dead has been released in Dvd and Blu-ray format by Third Window Films. To find where you can buy this movie, click the following link: http://thirdwindowfilms.com/films/greatful-dead.]