Takashi Miike is not only known for having made more than 100 movies, but also for the fact that he is not afraid to take on new genres. As Miike is most know for his horror movies, samurai movies, and Yakuza movies, one could easily forget that he also directed musical narratives (The happiness of the Katakuris (2001) and For Love’s sake (2012)) and various comedies, like Visitor Q (2001).

Eventually, in 2013, Takashi Miike received the honour to add another genre to his already varied oeuvre: the thriller narrative. So how does Miike’s first thriller fare?

When the 7-year old Ninagawa Chika is found death, it does not take long for Kunihide Kiyomaru (Tatsuya Fujiwara), a man with a prior conviction for assaulting and killing a girl eight years ago, to become the prime suspect. Sick of the failing system of justice, the terminally ill grandfather of the child, Takaoki Ninagawa (Tsutomu Yamazaki) decides to take matters in his own hand and publishes an ad rewarding the murderer of Kiyomaru with 1 billion Yen in all the major newspapers in Japan. Realizing he has become a target, he turns himself in at the Fukuoka Police Station.

The narrative of Ware no Tate has two divergent levels, two levels that are equally characterized by a certain logic. The first level concerns the external, i.e. the attacks of outsiders on the escort mission and the way the higher police hierarchy uses the escort, while the second level deals with the internal, i.e. the interactions between those who escort and the escorted himself.

Focusing on the first level of the narrative and more specifically on the outsider attacks, we can discern the following: it’s only by having money problems, to which a money reward forms a solution, that the showing of emotionality – that every gruesome murder evidently brings with it – and acting upon this emotionality becomes possible. This aspect of money problems, an aspect that characterizes every person who tries to murder Kiyomaru, nevertheless dismisses the dimension of individual responsibility and desire in favour for underlining the ‘subjective’ necessity to act in light of the money reward. The narrative underlines, in other words, that it is only by having money problems that these subjects are compelled to act upon their so-called ‘desire of revenge”.

While the first level only sketches the setting – the external frame, the second level concerns the actual narrative. It is thus on this level, a level situated by the external frame, that the questions the narrative poses are to be found: Who will leave his duty? Who plays a double game? And although these questions are very present in the narrative, these questions fail to attain a sensible weight for the viewer. As a result, the dilemma – ‘Is it worth killing others for the sake of the criminal?’ – that underpins the interactions between the five police agents fails to function as the prime source of narrative tension.

The impotency of this dilemma is not caused by the way the different characters are progressively elaborated and how they are positioned in relation to the dilemma. This elaboration, how the narrative structurally deepens characters, is actually one of the strong points of the Ware no Tate. The distrust between different divisions  – and even the distrust of various men in their female senior (Narra-note 1) – act as a catalyst for the various conversations, conversations revealing each police officer’s backstory and motivation. The reason that the dilemma as well as the narrative’s elaboration of those characters marked by the dilemma fails to operate has everything to do with the impotent presence of Kunihide Kiyomaru, the prime suspect. 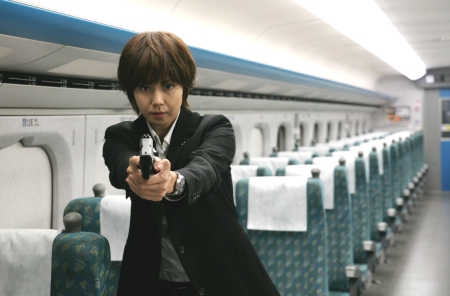 For the spectator, the prime suspect is very difficult to position as inherently evil. The way the murder is introduced – i.e. the not-showing of the deed, the revelation of information about the murder through conversations between the police officers, as well as Kiyomaru’s gestures and actions all fail to have a demonizing impact. In the end, even the irrationality Kiyomaru displays lacks any real impact. As he fails to have an emotional impact on the spectator, the above mentioned dilemma that structures the narrative can not realize its potential of tension: we do not care about the fact the murderer dies or not (Narra-note 2). As it is very difficult to invest in the dilemma that the various police officers face, one has to conclude that the movie fails in its premise of being a thriller.

If there’s something exceptional about Ware no Tate, it’s the way in which Takashi Miike stages the flawed narrative. In this sense the movie is a real showcase of Miike’s cinematographical prowess. With ease, Miike blends a variety of shots, e.g. snappy shots, longer static shots, longer moving shots, … etc, into a pleasing and smooth whole. When Miike stages action scenes, he lets an aspect of crudeness enter the cinematographical mix. By crudely follow the central character is such scenes, he succeeds to infuse a sense of chaos and urgency into the frame, thus empowering the action staged. Every scene serves as evidence of the directorial talent Takashi Miike has. One can easily sense that Miike has a firm grasp on the narrative and that he succeeds in realizing his cinematographic vision.

The aspect that most clearly shows Miike’s prowess is the way he uses space i.e. the framed space as well as the implicated (not-framed) space. In scenes where speech-interactions are staged, the gazes from the characters are quite often used to imply the aspect of interest residing behind the camera. These interactions also have the benefit, due to the way these moments are staged, in quickly assigning each character its narrative position and making the relations between each police department explicit.  As Miike is aware of the space in front and the space behind the camera, he is able to communicate this awareness to the viewer. As a result, the spectator is made conscious of the implicated space and is able to feel that this particular narrative takes places within a greater societal reality.

Ware no Tate, to put it boldly, is a movie that does not succeed in fulfilling its premise. As the dilemma that supports the narrative never functions as it should be, the spectator is never able to be implicated in the dilemma that drives the characters, ultimately depriving the narrative of the tension it needed. Luckily, this flawed narrative is somewhat saved by Miike’s masterful cinematographic hand. While Ware no Tate is in no way a bad movie – in fact it is quite entertaining, the spectator’s enjoyment finds its prime origin in the way Miike’s staging of the narrative and not, as should have been, in the unfolding of the narrative, as underpinned by a lingering tension. Miike might have saved Ware No Tate from a complete disaster, his visual talent cannot hide the fundamental flaw of the narrative.

Narra-Note 1:  Ware no tate also touches upon the tense relational reality between women and men in the police world (or even in the Japanese corporate world). The negative idea of being bossed around by a women at work, in addition to be bossed around by the wife at home is explicitly stated.

The drama Kyou Ha Kaisha Yasumimasu for that matter, stages the ideal image of how a women should function in a Japanese company.

Narra-note 2: People who’re able to demonize the suspect more spontaneously will be more sensible for the dilemma that underpins the narrative.