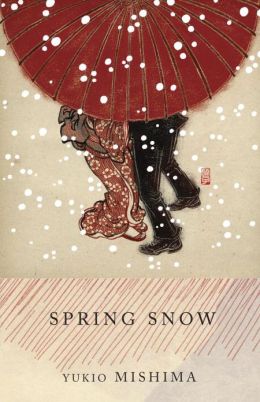 Spring snow commences in the year 1912. The Meiji period has just ended. The sealed world of the age-old privileged class is breached for the first time by rich provincial families. Unburdened by tradition, these families prove to be worthy challengers for social and political power.

In 1912 Kiyoaki Matsugae, the only son of an old and very wealthy samurai family, is still only a schoolboy at an exclusive, but rigidly spartan-like Peers school. At early age he was entrusted by his father – for it was his father’s wish that his son could serve at the highest levels of the imperial court – to the family of Count Ayakura, a nobleman.

Eventually Kiyoaki develops romantic feelings for Satoko Ayakura, the daughter of Count Ayakura. But their love for each other remains unacknowledged. And thus, because tradition demands that Satoko’s family needs to find her a husband, she has to commit herself to marrying the Emperor’s son.

Eventually, after the sudden engagement of Satoko, Kiyoaki finds his courage and confesses his desire:  he and Satoko become lovers. They doomed nature of their love affair becomes apparent when the young lovers – in the bloom of their love – face the inescapability of the snow-cold reality of their world.