“Isao Takahata delivers a wonderful, but sad meditation on desire and its effects.”

After a long hiatus – his last film My Neighbors the Yamadas dates from 1999 –  Isao Takahata, a director who has long been overshadowed by his longtime colleague and studio Ghibli co-founder Hayao Miyazaki, ‘returns’ to deliver his interpretation of the  9th/10th century classic Japanese folktale The Tale of the Bamboo Cutter (Taketori monogatari, 竹取物語). Is Takahata’s animated adaptation, which took eight years and a budget of 5 billion yen to make, worthy to be watched or should we hide it in a bamboo stem never to be cut down?

The story commences when Okina (voiced by Takeo Chii), an old bamboo cutter, discerns a sprout of bamboo. The sole reason why Okina is attracted to this sprout is because it’s too soon for bamboo to grow. While investigating this strange occurrence, the sprout suddenly grows exceptionally fast and starts glowing. He cuts the now full grown bamboo tree down. 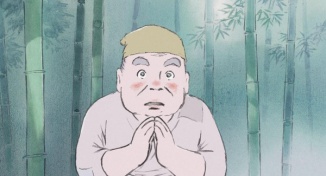 Inside the hollow intermodal stem Okina finds a tiny perfectly proportioned girl (voiced by Aki Asakura). Excited by his miraculous discovery, he takes her home to his wife Ouna (voiced by Noboku Miyamoto). Okina and Ouna decide to raise the fast-growing bamboo-child as their own. Not long thereafter, Hime (“Princess”) – this the name her father Okina gives her – starts to explore the surrounding forest, while making friends like Sutemaru (voiced by Kengo Kora) along the way. Because of her rapid growth, these friends call her Takenoko (“Bamboo sprout”).

When Okina finds more treasures in the bamboo, such as gold nuggets and fabrics, he decides to do everything he can to give Takenoko/Hime a life worthy of a princess. The ‘family’ moves and installs Hime in a palace, surrounding her with servants.

The word of the beauty of (the now called) Kaguya-hime (the Shining Princess かぐやひめ) spreads quickly, eventually attracting five suitors from prestigious families. Kaguya-hime asks the men to find memorable marriage gifts, gifts that would endorse their love for her. But every one of the suitors fails, unable to deliver what Kaguya-hime asked them to. Then, the Emperor of Japan proposes to her.

The exploration of the life of the extraordinary Kaguya-hime is nothing other than a sad family drama that examines the consequences of desire. The movie succeeds masterfully in showing the tragic effects of the desire of the father, the suitors and the emperor on Kaguya-hime. The father, for instance, is driven by his quest to give Kaguya-hime the life she deserves. Soon enough though, his desire to be of nobility pollutes this ‘noble’ quest.  Through his reactions, it is very clear that the strides Kaguya-Hime makes in behaving like a princess serve his own purpose. In the end, his desire is expounded when the Mikado (the emperor) is willing to give Okina a title of nobility. Kaguya-hime responds that she would marry the emperor, if that would make her father happy.

The movie shows how the medieval Heian aristocratic world functioned and how a female child was treated in this context: i.e. the education of Kaguya-hime in the ways of aristocracy. More importantly, the movie demonstrates the way an unmarried woman was viewed in that time.

Kaguya-hime is portrayed as a treasure hidden in a box/cage (note 1). This is beautifully shown in the scene of the big feast to celebrate her adulthood, where Kaguya-hime, hidden in a cage, appears isolated from the festivities. This isolation is also very obvious, when the suitors present themselves as they cannot see her. This has two effects. First of all, it reveals that each suitors is attracted to an undefinable image of her beauty – this lack of definition instigates their desire. The second effect is that the cage reduces Kaguya-hime to an undefinable object. The desire of the suitors can thus be described as a reduction of Kaguya-hime to a shining object, an unknown sparkling treasure to add to their wealth.

The refined use of the medieval Heian aristocratic setting is one of the core strengths of the movie. It underlines the essence of the story, namely that the father, the suitors and the emperor circumvent Kaguya’s desire. That is the tragedy that befalls our princess. In no way is this movie a feministic statement (note 2), because the question of desire surpasses any gender differences. As a universal statement about desire, this movie is a masterpiece.

This question of desire emphasizes that this anime is in no way a story for children and is aimed, just like the director instilled, at a more adult audience. Even though the movie indirectly proposes an answer to the question it raises, it will nonetheless leave the audience ponder nostalgically for a while. The tale of Kaguya-hime affects the audience not only because it ends bad, but because it confronts us with this question of desire: Do we follow our own desire? Do we follow the desire of the other? Or would we rather have no desire at all? (Note 3 [big spoiler]).

The art style of the animation is very different of other Ghibli productions and differs greatly from usual anime styles. In The Tale of Princess Kaguya Takahata favores an impressionistic style, which is reminiscent of eastern brush paintings, the water color and ink art of ancient Japan. Besides being an impressionistic painting of the Heinan aristocratic world, the moving interplay of brush/pen strokes, charcoal lines and lightly brushed colours aims to accentuate the purity and beauty of the nature, the fauna and the flora. But more importantly the animation aims to be a celebration of the purity and beauty of movement as such. The passages where Kaguya-hime runs for example are a feast for the eyes, while these scenes – there are many others as well – at same time also move the spectator emotionally.

The art makes the story, which is not that complex, stronger. The art in itself is emotionally invested through the story. This is one of the reasons why the animation, supported by a sublime soundtrack, has the intrinsic ability to touch people emotionally. In the running scenes, the drawing and animation happens with rougher pen strokes and a more muted colour palette, which induce an emotional response in the viewer.

The tale of princess Kaguya is a major artistic accomplishment. The reason is not the complexity of the story, but the sublime execution of the narrative. The honesty and purity of the art, the ease by which the moving interplay of brush strokes and charcoal lines convey emotion, the thoughtful and effective use of music, … . In every aspect of the movie, we feel the presence of an exceptional craftsman.

In the end, The tale of princess Kaguya is incontrovertibly comparable to the premise of the story. This movie is a gift from Takahata and studio Ghibli, just like Kaguya-hime is a gift from heaven for Okina. All what is left for us to do, is to accept and take this gift, cradled in own palms, to our friends and family and share this phenomenal masterpiece.

Note 1: The image of a treasure in a box corresponds with the way she was found: hidden in a glowing bamboo tree.

Note 2: The people who read this movie as a feministic statement seem to forget the Heian cultural context in which the story takes place.

Note 3: We can summarize the movie as follows: Kaguya-hime is punished and send to earth because she desired. Once on earth her desire is circumvented by the desires of the others. In a moment of weakness, she requests for ‘the lack of desire’. The movie concludes with the fulfillment of this desire.