“A hilarious, mischievous superhero narrative driving by the force of the used pantsu and the idea that erotics can save the world.”

These subsequent questions reveal that the main storyline is not so much about the gang of foes that want to take over the school to gain access to the treasure that’s buried there, but about the relation between Kyosuke, Aiko and (used) pantsu. The narrative is about how those three aspects (Kyosuke with Aiko, Kyosuke with pantsu, Kyosuke/pantsu with Aiko) can have any relation with each other whatsoever. The plot about the gang of foes is nothing more than a slightly wafer-thin, but comical and silly narrative device that makes it possible to focus on the evolution that Aiko and Kyosuke go through.

Hentai Kamen translates the ‘spoof’ essence of the manga, upon which it is based, in a very satisfactory way, using exaggeration in every aspect to ensure the comical effect and underlining the silliness and absurdness of the narrative. The cinematography and music/sounds support the staging of puns and enforces the humour it entails to deliver. In other words, the narrative diachronic plane, the plane of sense, is successfully peppered with aspects of non-sense and these aspects are successfully brought to the fore using the cinematography and sounds. Nevertheless not every aspect of the humour is effective, by which we allude to the puns that are used in conversations. 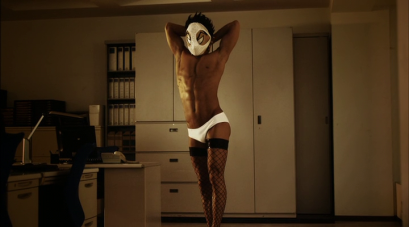 The explicitly voiced sequentially metonymic questions, we mentioned before, also point to the special way in which speech is used in Hentai Kamen. More specifically, besides the conversational use, the speech of Kyosuke has three different functions in the narrative. Speech as inner monologue, this is mostly used in the beginning of the narrative, is used to give the viewer the coordinates of Kyosuke’s subjective position. This second way Kyosuke’s speech is used is as a narrator, by which he further explains who he is. The third way, and this way is used abundantly to stage Kyosuke’s dilemma’s, is the externalization of inner monologue; the voicing out loud of Kyosuke’s line of thought in the narrative reality – in the end we even get a externalized inner dialogue between Kyosuke and his alter ego. (This third kind of speech is also used for Aiko).