With so many bittersweet romantic narratives being released in Japan, one might forget that, amidst this oversupply, true little gems can be found. Can Akiko Ohku’s Tremble All you want be considered a little gem or is just another copy-paste romance narrative Japan is famous for?

Yoshika (Mayo Matsuoka) is a 24-years old office lady who has never dated anyone. But, she has loved Ichi (Takumi Kitamura) for around ten years – even though she never acted upon her feelings.

One day, Ni (Daichi Watanabe) organizes a drinking party. While Yoshika doesn’t want to go, her colleague (Anna Ishibashi) convinces her. Ni’s plan to confess his love to Yoshika is set in motion.

It is very clear that Tremble all you want concerns the difference between reality and fantasy, the difference between how one’s life truly is and how one wants it to be. If we take the enunciations in the beginning as true – as truly representing her situation, then the narrative subtly reveals that many of Yoshika enunciations are in fact self-deceptive reframing utterances. Ohku shows with much nuance the fact that subjects, by speaking, mainly aim to ‘repress’ the truth of their subjective position, e.g. their insecurities.

But while Yoshika subtly reframes her ego, there is one element that she apparently is not able to hide: her love for Ichi. Everyone seems to be allowed to hear her rather rhetoric stories about Ichi,e.g. her colleague, the masseur, a woman sitting next to her on the bus, a police officer, a shop attendant, … etc. – here the subtle reframing of her subjective position is sensible evoked in a charming way (Narra-note 1, Narra-note 2).

Throughout her speeches and the revelation of her rather empty life, it rapidly becomes clear that she is mentally stuck in a safe space conditioned by her semi-fantasized recollections of her un-recruited love. Furthermore, as she romanticizes her high-school love and her position towards him, another aspect implicitly resurfaces in her speech: her apparent failure to have acted upon her feelings for Ichi (Narra-note 3).

And that is what Tremble All You Want is partially about: the subjective evolution from being caught up in fantasy towards acting upon one’s feelings (Narra-note 4). In Yoshika’s case, her first act is caused by being confronted with the reality of death – and while this sounds somewhat heavy, the narrative touches upon death in a light-hearted way. But while she takes the first act, it is evident – and this is touchingly framed in the narrative – that it takes more than an act to overcome one’s mental barrier, a barrier caused by a general shyness and in part by her fantasmatic indulgence in Ichi. And as the narrative touches upon this mental barrier, it opens up a moving exploration of the consequences of being shy and not realizing one’s subject in speech towards others (Narra-note 5, Psycho-note 1).

The fact that Tremble all you want concerns the subjective reality of Yoshika is translated in the cinematography in a subtle, yet precise way. While for the greater part of the narrative the framing, consisting of fixed shots and following shots, remains steady – objectively presenting the interactions between characters within the narrative space – there are moments where trembling shots are applied as well (Cine-note 1). These trembling shots either empower the subjectivity of Yoshika’s rather rhetoric speech, bringing the spectator gently in touch with her special way of thinking, communicate, in the case of her subjective recollections and fantasies, her feelings (e.g. of love or of uneasiness), or empower her feelings (e.g. being annoyed, surprised, confused, happy, stressed) in the case her normal daily routine is disrupted (Cine-note 2).

When music is added to the imagery, it either expressing Yoshika’s subjective position (i.e. highlighting her subjective particularities, brighten up the awkward situations she finds herself in) or underline heartfelt enunciations, for example from her Ni or Ichi. Furthermore, the music – there is even a musical-sequence – and the various sound-effects empower the light-heartedness that characterizes the entire narrative space, a light-heartedness supported by Mayu Matsuoka’s and Daichi Watanabe’s performanc (Sound-note 1).

As the narrative depends for the greater part on Yoshika, it is a relief to see that Mayu Matsuoka portrays odd-ball Yoshika with so much charm and feeling – and with a nuance not often seen in Japanese comedies (Acting-note 1). Daichi Watanabe, who portrays the rather naïve but sincere Ni, further enhances the light-heartedness of the narrative by infusing his conquest of Yoshika with the right amount of silliness. 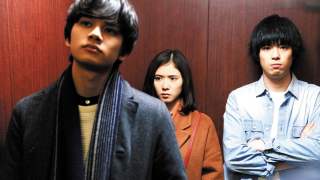 To answer the question from the introduction right away: Ohku’s Tremble all you want is nothing like the ordinary Japanese romantic cinematographic narrative. The main reason for this is that, besides showing a lighthearted romantic narrative, Ohku is able to successfully show the problematic impact of fantasy on our life and sensible evoke the inherent self-deceptiveness of our ego. In other words, Tremble all you want is a refreshing little gem, a truly heart-warming experience full of honest and heartfelt emotions.

Narra-note 1: Note that Yoshika also has one other fixed topic, i.e. instinct animals and fossils.

Narra-note 2: Later in the narrative, the semi-rhetoric conversations will be revealed as fantasized. This revelation underlines, once again, clearly the centrality of Yoshika’s subjectivity to the structure and the cinematography of the narrative.

Narra-note 3: The narrative also shows that one sometimes needs a bit of luck – luck that forces you to overcome your shyness.

Narra-note 4: But fundamentally the narrative concerns the choice between reality (Ni) and fantasy (Ichi). And of course, it is easy to guess what happens when one meets one’s fantasized image of love in reality.

Narra-note 5: The main consequence of being shy and not being able to realize one’s subject by speaking is evoked by Ichi’s forgetting of Yoshika’s name. In a subtle way, the narrative expresses the link between own’s own name as signifier within the symbolic and one’s symbolic existence for another within that symbolic system.

Sound-note 1: There is also some in-narrative-space music, e.g. the music Yoshika listens too.

Acting-note 1: While over-acting – a trademark of Japanese comedy – is still present in her performance, Mayu Matsuoka’s performance feels more nuanced than can normally expected from Japanese comedic acting.