“Shady reveals in an unsettling way, precisely what love is not about. (…) Watanabe’s visual language shows a lot of potential (…) And it is this potential we want to see blooming in the future.”

As the current cinematic landscape of Japan seems to silt into mere translating popular anime and novels, often forced into a tried and tested mold conditioned by capital, one might forget there is also an indie scene, where, by standard, creative freedom is more appreciated and where, quite often, more refreshing (one’s) handling of the reins; how well one controls thingsand inventive narratives are produced.

One narrative that emerged from this indie scene and impressed audiences was Ryohei Watanabe’s Shady or Kashikoi inu wa hoezuni warau (a clever dog, laughs without barking). His debut feature won the Entertainment Award at the PIA Film Festival in 2012 and even got released on DVD internationally by Third Window Films. Reason enough for Psycho-cinematography to put Watanabe’s Shady under our reviewing microscope.

Misa Kumada (Mimpi * β) is a shy and lonely outsider at her high school, who is bullied by Marina, who calls her mockingly Pooh-san because of the signifier kuma, which means bear in Japanese, and her bear-like face (cine-note 1). Misa tries to make school life bearable – pun not intended, by evading eye-contact, the confrontation with the intrusion the look(ing) of the others may contain, as much as possible. The only worthwhile relations she has are with the fish Kintaro in the biology club and her bird Chunta at home. When the cute Izumi Kiyoshi (Izumi Okamura) enters her life, pressing her to become friends with her, Misa – and the spectator as well – is surprised (Culture-note 1). As their friendship blooms, instances of meaningful prolonged eye-contact appear and the hiding of her looking, in relation to Izumi, almost completely fades away. In this change, Shady reveals that it is precisely in the eye of the others that one finds one’s self-image, one’s ego.

The out-of-the-blue nature of Misa’s and Izumi’s bonding feels somewhat suspicious for the spectator, but this bonding, as they share the same pain and loneliness, does feel genuine. As the narrative progresses, this suspicion abates almost completely – the disappearance of Aya Nishio keeping the suspicion alive – while the genuineness of the friendship, which ventures in more intimate regions, strengthens for the spectator. And then, the tone of the narrative turns a shade darker, as what Izumi so desperately hides behind her image, begins to surface in her comportments towards Misa, revealing who she really is.

Shady may provide some interesting glances to the Japanese ‘high school’ atmosphere, e.g. how bullying can go unnoticed, as not seen by the eyes of the teachers; how high-school girls can use their body to obtain privileges, …, but the main thematic axis concerns the tension between love and control, the enjoyment that controlling produces and the various effects it causes. The aspect of containment, as a visual and narrative motif, is evoked very early in the narrative, by underlining the leash of the dog, the cage of a bird, and the tank of a fish. This visual motif will ultimately bring the reduction of a subject to an object and the reduction of love to the mere satisfaction of needs sensible and disturbingly to the fore (psycho-note 1). Furthermore, it is the enjoyment of Izumi, as revealed by the changing nature of her laughing, that is most disconcerting for the spectator. And the visual motives Watanabe uses to frame Misa’s confrontation with Izumi’s enjoyment and the ‘truths’ it reveals, are powerful in expressing the traumatic impact of the confrontation. 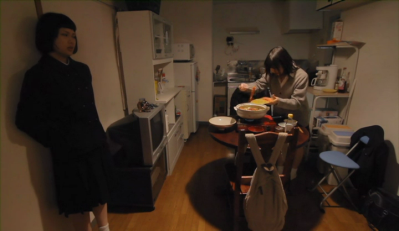 Shady’s strength lies in its narrative, the script as such, and how the young actresses, mimpi * β and Izumi Okamura, bring this narrative in general and, in particular, the development of their friendship to life on the silver screen. By using long takes, the stage is entirely given to the actresses and their interactions (cine-note 1). Empowered by the music and, in some cases, slow-motion, the interactions between mimpi * β and Izumi Okamura are so natural, that the tender moments of friendship are really heart-warming for the spectator – of course, the tenderness felt by the spectator makes the ending that much more powerful.

Watanabe‘s Shady proves to be a compelling and gripping debut feature. Besides underlining the importance of the image (cute/uncute) and showing how our ego finds its affirmation in the others we interact with, Shady reveals in an unsettling way, precisely what love is not about. Even though the cinematography may be somewhat rough around the edges, Watanabe’s visual language shows a lot of potential. And it is this potential we want to see blooming in the future

Culture-note 1: The use of the signifiers “kawaii“, for Izumi, and “kawaikunai (not cute)/busaiku (unattractive) “, for Misa, reveals the importance of the image, the imaginary in Japanese (senior high-school) culture in general and of kawaii culture between Japanese high-schoolers in particular.

Psycho-note 1: By reducing love to the mere fulfilling of needs and reducing the subject to an object, the demand and desire of that subject are short-circuited. This is sensible shown by way of Aya Nishio’s position.

Cine-note 1: Besides making the main narrative an extended flashback, the use of voice-over places the spectator in the subjective position of Kumada. Furthermore, the investment the spectator in Risa as a character has makes the final twist totally unexpected.

Cine-note 2: Shady‘s cinematography is also characterized by a certain fluency, the camera often wandering off to underline tiny details in the image. Jump-cuts are also used and in some instance In some instances, a blend between shakier shots and steady shots is to be observed.