“An often painful, often joyful but ever comical and inspiring tale of finding love.”

The hero of the Boys on the run is Tanishi Toshiyuki (Maruyama Ryuhei), a salaryman who works for the Saida Company, a small toy manufacturer. He has never had a girlfriend in the 27 years he walked on the planet and has thus no experience with women whatsoever. Toshiyuki is ridiculed by his co-workers and others as uninteresting, stupid and the last person who will achieve success in life.

But then he falls in love with his cute colleague, Uemura Chiharu (Minami Akina), a girl who seems unapproachable for him. He relieves this dejection every day through telephone dating clubs and adult videos. It’s only when he talks about his self-induced inability to make progress to Aoyama Takahiro (Saito Takumi), a salaryman from the rival company Mamnos who gives him advice that Tanishi starts making progress with Uemura.

Will Chiharu be his first successful love or will his inexperience form an obstacle to a happy ending? And which role will the boxingclub, Hana Ooiwa (Airi Taira) and Gen Ooiwa (Red Rice) play in Tanishi’s life ? 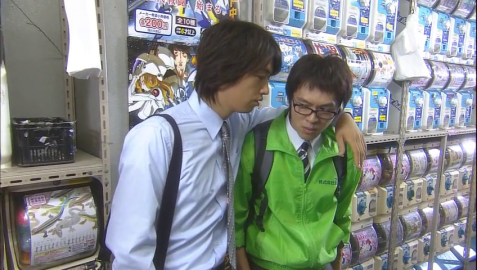 Because of the fact that Boys on the run is a sort of coming of age narrative – we would even call it a sort of ‘delayed’ coming of age narrative, a kind of narrative that seems to be unique to the Japanese culture, it’s narrative obviously shares similar structuring questions with other male grounded coming of age drama’s like Moteki and even Minna! Esper Dayo: 1) Will the ‘hero’ be able to overcome his problems/obstacles and 2) will he be able to get the person he loves. These questions form the main theme of the narrative and gives boys on the run an easy to follow structural simplicity.

But even though this structural simplicity guides the narrative, the viewer is never really conscious of it. The two guiding questions that grounds Boys on the run, as a matter of fact, is stuffed with interesting, believable characters – even the more comical inspired acting of Ryuhei Maruyama, i.e. the way he uses facial expressions to express his uneasiness, his resolve, … (note 1), never lacks a sense of believability – and interesting interactions which lead to fun, touching as well as inspiring moments. In other words; it’s the narrative itself and the realization of the story on the screen – the body of the structure – that doesn’t fail to implicate the viewer, assigning him a rooting relation with respect to Toshiyuki.

One of the most important aspects which gives body to the narrative, and implicates the viewer in Toshiyuki’s staged subjectivity, is the aspect of blame and guilt. This aspect is, for the major part of the narrative, solely concentrated in the main character Toshiyuki Tanishi, the sole person who takes up all the blame. This  blaming’ aspect of Tanishi drives and cranks every action he undertakes. The prospect of atoning for his mistakes, the events he blames himself for, and fixing the bond with the girl he’s in love with, is the simple edifice around which the body of the narrative is structured.

The inspiring aspect of Boys on the run comes from the fact that Tanishi doesn’t give up, no matter what happens, no matter how petty his situation is – the Ganbatte theme. He keeps on fighting for the girl he loves or more precisely to atone for the mistakes (he thought) he made with respect to that girl. The viewer really wants Toshiyuki to be successful and to find love. Because of the fact that Boys on the run succeeds in establishing this rooting relationship with the viewer, the narrative evocates an ever present interest (and even some doubt) concerning the outcome of the narrative, the outcome of the two questions that structures the narrative.

Boys on the run is told solely from the perspective of Tanishi, which means that the staged narrative is inherently subjective. This subjectivity is brought to the fore by way of staging the psychic reality of the main character in the same way Minna! Esper Dayo! did; In various instances inner monologue is used to stage Tanishi’s consciousness. In the same vein the cinematography also succeeds vividly in bringing the emotional impact of events for Tanishi to the fore; emotions that are sensible for the rooting viewer.

The look we get into Tanishi’s psychic life also means that the subsequent events to which he is subjected can have sensible effects for the viewer. As a viewer we are made aware of how he sees and interpret the narrative reality (i.e. a reality where he takes all the blame). But what the narrative by way of its staging also reveals is the inherent impropriety of this psychic reality, the ego. We’re equally aware that the blame Tanishi appropriates, given the ‘objective’ coordinates of the events, is underpinned by an inherent mendacity (i.e. the fact he doesn’t see that others are blamable too).

It’s because of this narrative gap, this ignorance of the blame-ability, that underpins the character of Tanishi, that he’s able to become, for the viewer, a character to root for or a character with whom we can identify. The prime example by which this subjective view underlines this ignorance is to be found in the interactions between Chiharu and Tanishi. Besides the fact that Tanishi as well as the viewer are for the most part of the first cycle of the narrative at a loss on what Chiharu actually wants from Tanishi after his mistake – the question is what could mend his mistake for her?, the viewer becomes nevertheless aware of the fact that Chihari is unconscionable in her subsequent actions/interactions and that she fails to see the honesty that drives Tanishi’s fight for her – one could blame for the fact she’s by her angriness (note 2).

Boys on the run is a good dorama that provides an often painful, often joyful but ever comical and inspiring tale of finding love. It boasts an interesting narrative kept ever interesting by the character of Tanishi, his interactions and his sincere undertakings.

The cinematography maintains a good quality throughout the narrative. It does what it needs to do but nothing more: it sketches the context in which the interactions between characters plays out, gives place to the subjective consciousness of the main character, … . Additionally the cinematography does succeeds in providing a place to bring the emotions of the main character to the fore, so that these emotions are sensible for the viewer.

All this makes Boys on the run an inspiring, fun, emotional ride; a ride that’s well worth the watch, a ride which doesn’t fail to communicate the spirit of Ganbatte: if you fail, try again. If you fail even harder, get up and try again, …. . Who knows if you could succeed in the end?

Note 1: Nevertheless we should warn viewers about the possibility that one could have a problem with the way Tanishi is portrayed i.e. the facial expressions. But as far as we can see this shouldn’t problematize your viewing pleasure.

Note 2 (Spoiler): The very last scene in the last episode with Chiharu is very instructive concerning this blindness, because it reveals that her love for Tanishi was always present behind that blindness. Her love could thus very well be the driving force behind her anger. What this scene also could be showing is that aspect that Chiharu wanted from Tanishi.